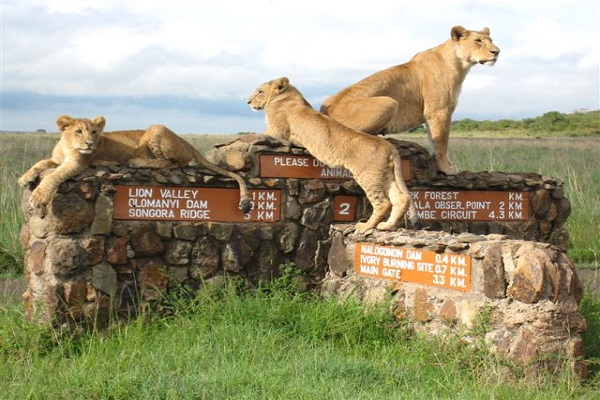 Written by sundaysafaris on September 14, 2016. Posted in Tours

Nairobi Executions give you a short tour into the Nairobi city, the Nairobi National park, Sheldrick Animal Orphanage and the Bomas of Kenya.

One of Kenya’s original National Parks established in 1946, features 46 square miles of pristine savannah and yet is only six miles from the city center. Large populations of giraffe, wildebeest, eland and gazelle dominate the plains. Of the big five only the elephant has not been spotted. Prides of lions may appear at the entrance to Mbagathi Gorge. This park also offers the spectacle of a Nairobi silhouette on the near horizon. Bounded by the Athi River to the south with its hippo pools, the park has two animal orphanages.

In the park is the Animal Orphanage where sick, wounded and abandoned animals are cared for and rehabilitated into the park, as well as an Educational Centre featuring a Safari Walk.

Close by is the Sheldrick Elephant Orphanage, where infant elephants and rhinos (orphaned because of poaching activities) are cared for
and eventually returned to the wild in Tsavo National Park. The centre is open every morning and visitors can watch the calves bathing in the mud hole and being bottle fed by their human surrogate mothers.

Pick from your hotel at 6:30 a.m. and proceed to Nairobi national park for game drives until 10:30 a.m. Proceed for Sheldrick Elephant Orphanage which opens their gates from 11:00 a.m. to noon. At 12:30 p.m. you will be driven for lunch at a place of your choice. Later be taken to Bomas of Kenya for an insight to the cultural lives of the tribes of Kenya.